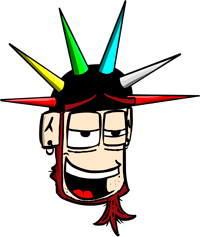 Staind, back around 1999, was a band I listened to obsessively and aspired to be like. At one point someone mentioned I sounded a little like Aaron Lewis. Yay?

After their debut album did well enough, Mr. Durst and their evil record contract proceeded to replace their then-edgy sound with watered down over-produced nonsense.

I overheard Aaron Lewis singing for his solo project and suddenly felt like square dancing.

Someone mentioned to me that Staind's newest album has them somewhat returning to their roots, but that only works for Max Cavelera.

Note: The following comments are being pulled from when the comics were hosted by Alfredo Afro. You can still comment, reply, etc.